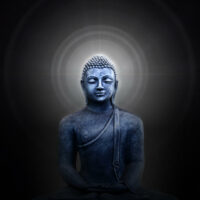 “When we were one or two years old we had what we might visualize as a 360-degree personality. Energy radiated out from all parts of our body and all parts of our psyche. A child running is a living globe of energy. We had a ball of energy, all right: but one day we noticed that our parents didn’t like certain parts of that ball. They said thinks like: “Can’t you be still?” Or “It isn’t nice to try and kill your brother.” Behind us we have an invisible bag, and the part of us our parents don’t like, we, to keep our parents’ love, put in the bag. By the time we go to school our bag is quite large. Then our teachers have their say: “Good children don’t get angry over such little things.” So we take our anger and put it in the bag. By the time my brother and I were twelve in Madison, Minnesota, we were known as “the nice Bly boys.” Our bags were already a mile long.”

“One of the greatest benefits of shadow work is that it frees up energy that would otherwise be spent shadowboxing within ourselves.”
– Ken Wilber

The late Fr Thomas Keating, the great teacher of Centering Prayer, likened the process of healing that comes during this prayer to working with a therapist. He even liked to call God “the divine therapist.” But Keating acknowledged, in a series of discussions with Ken Wilber, that Centering Prayer alone wasn’t a total therapeutic package. And one of the areas where it failed to help much at all was with regard to shadow. Centering Prayer isn’t alone in this. It turns out that none of the contemplative or meditative practices from the great religious traditions are of much use in dealing with shadow. In fact, awareness of shadow and other aspects of the unconscious are relatively new discoveries, dating back to the work of Sigmund Freud in the early 20th century. It’s hard to believe but before Freud, ideas like repression and projection were simply not in the dictionary.

Shadow, as I’m using the term today, is the name given to all the parts of oneself (whether thought of as energies, subpersonalities or aspects of the self) that one is unable to consciously own as parts of oneself. If I’ve disowned anger, then I will not be aware of my anger. I will deny ever being angry. When anger arises in me, I will see it externally in others, in the world. This may lead to me seeing the world as a very angry, unsafe place if I have a lot of repressed anger.

These days we are all awash in uncomfortable awareness of our shadow material, both personal and collective. As we mark the one-year anniversary of the death of George Floyd, many of us are still coming to terms with racist shadow material. Shadow work is messy and uncomfortable but oh so liberating! The amount of psychic work we have to do to keep shadow material under wraps costs us greatly. When we are able to own and re-integrate our shadow, tremendous amounts of energy are liberated. We come away from the work humbled, with a new appreciation for what Whitman might have meant when he wrote, “I contain multitudes.”

People who consider themselves spiritual or religious tend to have special additional issues with regards to shadow. Whether we go to religious services or not, we all grow up with a sense of what it means to be a good Christian/Jewish/ Buddhist [fill in the blank] boy or girl. All religions list qualities like loving, kind, and selfless as fruits of the spirit. So you can be sure that most of us have exactly the opposites of these traits in our shadow bags. If we long for wholeness, we will do well to retrieve all those aspects of self that are unloving, unkind, and selfish at some point. (And please remember, I’m not talking about acting out unloving impulses, but of owning them. After all, it really isn’t nice to try and kill our brother.) As we integrate our shadows, our spiritual lives take a quantum leap forward. We gain not only huge amounts of energy but also an earthy humility that allows us to empathize more deeply with others and to laugh at our own foibles. We gain a wholeness that grounds us in the truth of who we truly are – transcendent radiance and earthy humanness.

This integration is not for the faint of heart. It is task for spiritual heroes. But it can be done slowly, over time. There’s no getting it all taken care of quickly. It takes time. And for those who take up this good work, there are such treasures to be retrieved!

Here’s to your ongoing awakening!

View all posts by Bill Epperly →